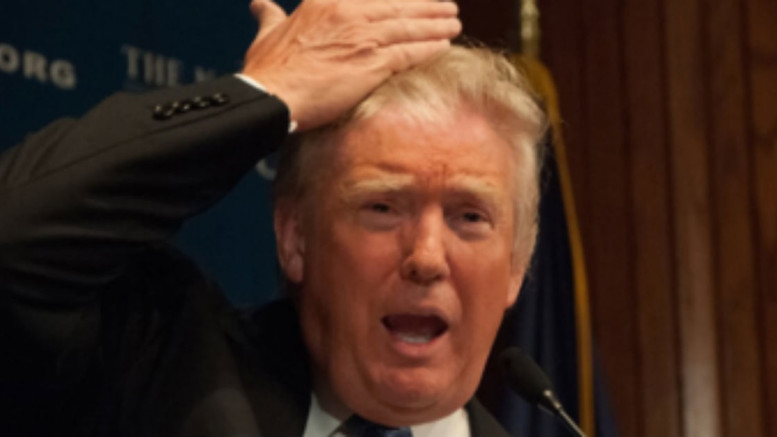 WASHINGTON D.C. — During a spur of the moment photo op, President Donald Trump was asked to hold a woman’s baby. Which he then dropped. Hard. On the ground.

While touring a California face mask making facility, President Trump was asked by mask maker Kimberly Jackson if he would take a picture while holding her baby. Jackson had the day off from work, but showed up as she wanted to attend Trump’s visit to her workplace.

“I basically just yelled at the President, asking him if he would take a pic while holding my baby boy, Brice. To my surprise, he actually said yes. I guess it’s a good photo op for him.”

“I was forced to hand my baby to some secret service goon, who then handed Brice over to the President. Trump cradled Brice in his arms, and I snapped a photo. When I looked at my phone’s screen, I noticed that Brice wasn’t in the photo and Trump’s hands were empty. He dropped my fucking baby boy.”

We reached out to the Trump media camp in regards to the baby incident, but they replied ‘no comment’.

Luckily for Jackson, one of her coworkers was filming the entire moment for her. That video was uploaded to Twitter and President Trump was tagged. Trump, being the Twitter guru that he is, replied with the following tweet.

This is what Jackson had to say about the Tweet:

“This son of a bitch didn’t even apologize after dropping Brice. He dropped him like he was hot, just dropped his tiny little butt on the hard cement floor. Then he has the nerve to tweet back on the video of the happenings and say it was ‘the biggest and greatest drop of all time’. What the fuck does that even mean? I don’t think I’m going to vote this year. Fuck that.”

“And I never got my damn picture”.

Brice didn’t sustained any injuries from the drop.

Trump And Pence To Harness Their Passion For...

Joe Biden Reportedly Getting To Close To Anime...