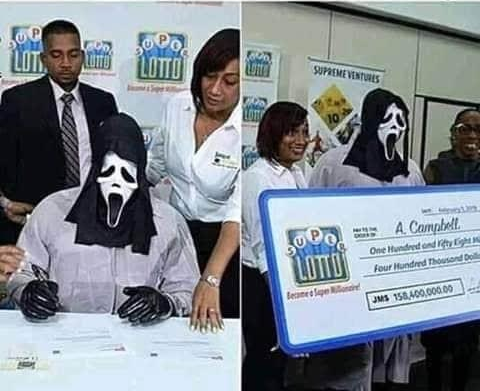 We know this dudes name, but out of respect we are not going to release it. (However, they put nearly all of his name on the big damn check.) Either way, he’s a rich mother fucker with a freaky sense of style.

And…since he has all the time in the world now, he was able to provide The Bored Avocado with a brief comment on why he wore the mask to collect his windfall of cash.

$158 million man…$158 mill…that’s a lot of cash bro. You think for one second I’m going to let my greedy ass family members know that I have this much loot? Hell no. So that’s why I wore the mask. But these ass-hats put my first initial and last name on the big ass check. With that said, I’m pretty sure my bum ass bitch cousin Eddy knows I won. He saw ‘the masked man’ on the news and called me saying that he thought it was me because the dude was wearing the same outfit that I wore at his Halloween party and my first name starts with A and my last name is Campbell – way to go lottery bitches. Mother fucker is right though. It is the same costume I wore. I didn’t think Eddy was smart enough to put the two together. But he does love Halloween and he does know my name.