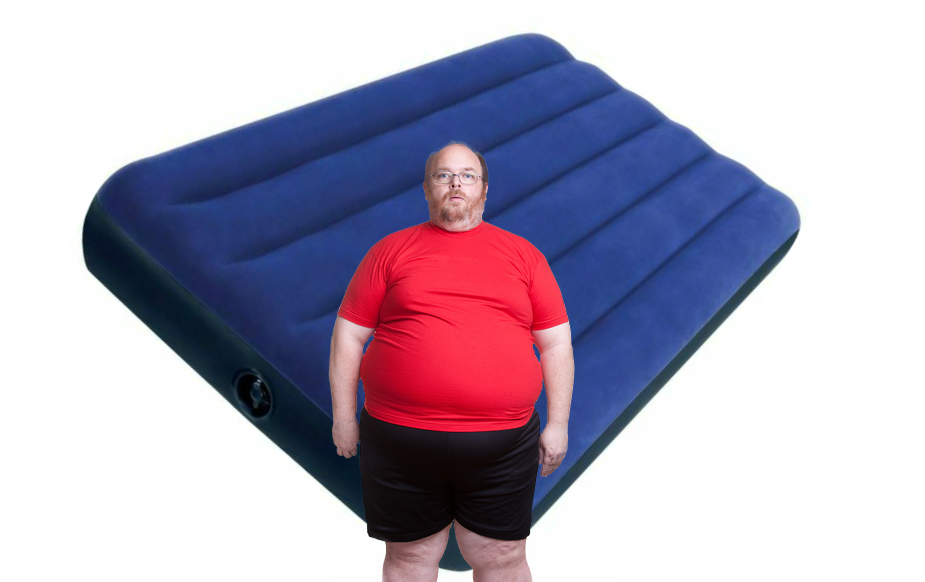 LANSING, MICHIGAN — When Kent Star purchased a twin sized Coleman air mattress to replace his old spring mattress, he was under the impression that the mattress would support a large sized adult. This was not the case and 328-pound Kent isn’t very happy about it.

I was at Walmart a few weeks ago and came across a Coleman air mattress that was on sale. I have a super old mattress at home and thought ‘this was a good time to upgrade a little’. The twin air mattress was on sale for $24.95, down from $34.95 – good deal right! I did have to purchase an air pump though, but that was only $10. I got the air mattress home and blew it up straight away! It was so comfy! That night, I woke up around 2 a.m. and I was almost sleeping on the floor. The air mattress had deflated. I know I’m a big boy, over 300-pounds, but the box said it would support over 400-pounds – which is clearly bullshit. I had to go get the pump in the middle of the night, stand on it and manually pump it back up. By the time I was back in bed, I was a sweaty gross mess. Fast forward a couple hours and I wake up again…this time though…I’m on the floor. The whole fucking mattress deflated – AGAIN!

Kent reached out to Coleman, but sadly they responded without any useful help.

I asked those son of a bitches why I have to keep blowing up this damn bed throughout the night. I told them I was 328-pounds and all they wrote back was – ‘that’s probably the issue’. So basically they fat shamed me, but the fucking box says it supports up to 400 pounds. I know I sweat a lot at night, but I don’t think I produce 72 pounds worth of liquid out of my ass. Maybe half that at best.

At the time of this press release, Kent is having to blow up his mattress at least 6 times per night. On a good note, Kent stated that he has lost 31-pounds due having to pump the air pump so much.

That manual pump is a real bitch. • Kent Star