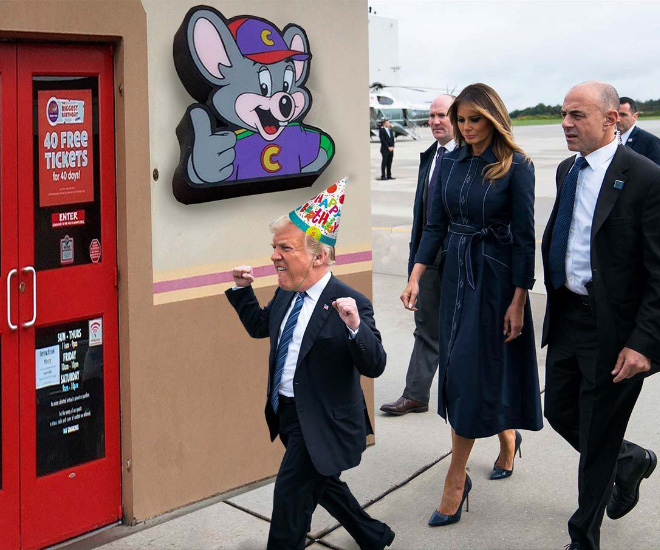 WASHINGTON D.C. — Last Saturday was a very special day for President Donald Trump and likely a day that he will never forget. First Lady Melania Trump took her husband to Chuck E. Cheese to celebrate a major American victory in the fight against the ‘Chinese Virus’, more commonly and scientifically known as ‘COVID-19’.

America is now leading the way in the number of COVID-19 cases and Donald was just so excited to see that his country is number one, I knew I had to reward him somehow. One of Donald’s favorite places on Earth is Chuck E. Cheese, so that’s where he decided he wanted to celebrate. Donald has just worked so hard in getting those COVID-19 numbers up over the 5-million mark, he needed a day of play. • Melania Trump

Our cameras caught President Trump as he entered Chuck E. Cheese last Saturday morning, his hands tightened in a fist and thrusting into the air, his excitement was quite contagious. The First Lady followed gracefully behind her husband as he repeatedly chanted ‘Brazil sucks ass’ while entering the children’s gaming facility.

Once inside, President Trump disappeared into a ball pit and we were unable to snag him for comment. However, one of the President’s Secret Service agents did speak with us briefly.

I just can’t believe this is my job. I worked so hard my entire life to end up at a Chuck E. Cheese, on a Saturday, guarding the life of a man who is currently playing in a ball pit with 6-year-olds. The only thing I really have going for me at the moment, is the fact that I think Melania is hitting on me a bit and that’s pretty cool. She’s definitely a FLILTF. That’s a First Lady I’d Like To…well…you get it. • Lance Rolley, SS Officer

President Trump ended up spending the majority of the day at Chuck E. Cheese and it’s rumored that he won the most tickets ever won at any Chuck E. Cheese ever, in the entire world. The only President to ever win so many tickets, ever.