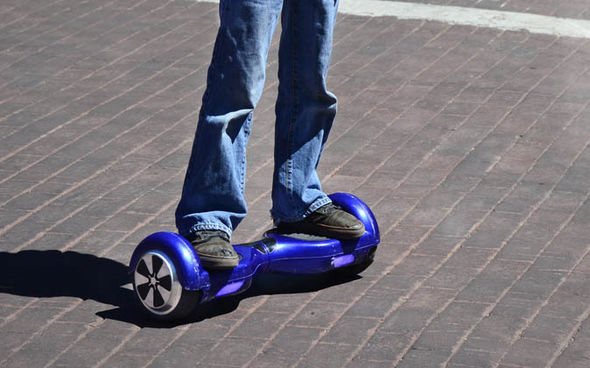 PHOENIX, ARIZONA — When 38-year-old Dave Emerich received a hoverboard for Christmas back in 2017, he had no idea that it would provide him with so much joy and ultimately fuck up his entire life.

Emerich unwrapped the hoverboard Christmas morning, immediately plugged it in and that was the last day he ever walked again.

I could move around with ease, like I was floating or flying. I felt like a true superhero!

Emerich used the hoverboard so much, he ended up purchases 5 more, that way he would always have backups, charged and ready to go. If Emerich was going on a longer journey, he would strap a second hoverboard to his back, just in case the first one ran out of juice.

Fast forward to present day and Emerich finds himself in a bit of a quandary. After a night of heavy drinking, Emerich forgot to plug in his hoverboard before falling asleep. When he woke up in the morning, he rolled out of bed, put his feet on the board and it was dead. The five other hoverboards were charging in the an adjacent room. Not thinking anything of it, Emerich put his feet on the floor and attempted to head towards the charged hoverboards. His legs buckled and he fell flat on his fucking face.

I couldn’t believe it. My legs just gave out and I honestly couldn’t even remember how to move my legs. I had forgot how to fucking walk.  I dragged myself over to the charged hoverboards, hopped on one and rode into the living room. I sat on the sofa, rubbed my legs and gave them a little pep talk. I had honestly not thought about walking for over two years and now I totally forgot how. I was like a little fucking baby.

Emerich called his parents and explained the situation to them. His father wouldn’t talk to him because for the last year and half he was quite embarrassed by his son, simply wanting nothing to do with a 38-year-old man who can’t walk. Emerich’s mother offered to come over and help him, but Emerich just got irritated and hung up.

At press time, we reached out to Emerich to let him know his story was going to run and he had this little update for us.

So basically I don’t think I’m ever going to walk again. I have already applied for disability and am waiting on my claim to get approved. The first one was tossed out because the state doesn’t think that forgetting how to walk is a true disability. But I can tell you, it is definitely a disability. I mean, I can’t fucking walk. That’s like the definition of disabled. I tried to go through Veteran affairs too, maybe get myself some extra cash for the whole not being able to walk thing – but I guess you have to have been enlisting in the military or some shit for that. I’m pretty much stuck riding this damn hoverboard for the rest of my life, unless I want to learn how to walk again. I already did that once…I’m not doing it again.