Kid Wrestler Is Sick Of ‘Bitch A**’ People ‘Talking Sh*t’ 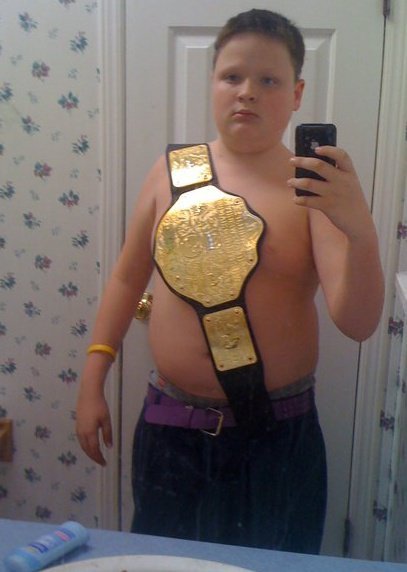 RICHMOND, INDIANA — 12-year-old Johnny ‘The Sausage’ Cole has had enough of ‘bitch ass’ people ‘talking shit’. Fresh off a recent backyard wrestling win against ‘Cocky Ron’, his 13-year-old neighbor from two doors down, Cole was fired up.

We were able to grab a quick comment on his big win.

You don’t mess with The Sausage, damn that felt good to beat Cocky Ron’s ass. I tell you what, I’m so sick of bitch ass people talking shit. I didn’t get this championship belt for nothing. People in my hood talk some serious shit to me and I’ll literally beat their ass for it. Man I can’t stand bitch ass people. • Johnny ‘The Sausage’ Cole

Curious about how Cole’s mother feels about his accomplishment in the wrestling world, we reached out.

Cole…Cole…Cole…he thinks he is sooo cool, always running around without a shirt on and wearing that damn wrestling belt. I think it’s great that he has friends and all, but he really should be out mowing lawns or doing chores instead of wrestling these idiotic neighborhood kids. Cole likes to think he’s a tough guy, but I can tell you that he still cries over the tiniest things. I told him he couldn’t have ice cream the other night and he cried like a whittle baby. He’s always talking about ‘bitch ass people’ this and ‘bitch ass people’ that…I may be his mother, but I know a bitch ass person when I see one…and that’s Cole. Damn bitch ass. • Ms. Cole