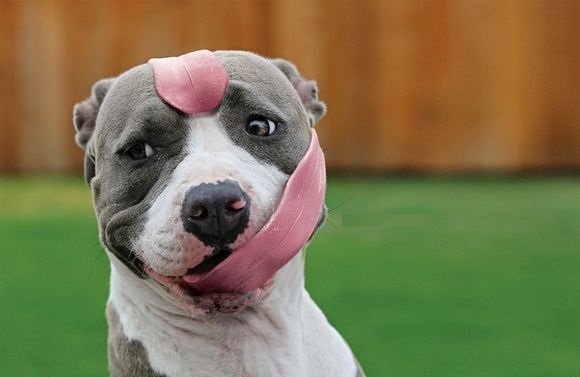 Branson, Missouri – Louie is a four year old pup that has become quite the local legend, all thanks to his enormous tongue!

Louie’s owner, Bradly Canes says that it is becoming incredibly hard to take Louie to the local dog park.

When Louie and I roll up to the dog park, the female dogs nearly line up for a chance to spend a little time with Louie and his ‘gift’ of a tongue. At first Lou loved the attention as he is a dog pleaser…but now…all this attention is really wearing on him…and his tongue. – Bradly Canes

We spent the day at the dog park with Louie and Bradly and were able to witness first hand the madness that Louie stirs up at the old DP. We also spoke to local dog owners at the park to get their thoughts and reactions about all the craziness.

When Louie first showed up and starting playing with my Sofia…I thought it was just innocent fun. They would run around, play ball and while the occasional dry humping did happen…it was nothing compared to the weirdness and creepiness of when Louie whipped out that tongue. As Sophia’s owner…I felt violated for her. She didn’t care though…I honestly was hoping that Louie’s owner may have the same special appendage! – Marcy P.

Man, if I was gifted like that dog, my life would be crazy different and crazy awesome! That’s one damn lucky mutt! – Gary D.

The Mayor of the city is planning on putting together a little ceremony in order to bring awareness to and recognize Louie’s abnormal, yet prolific tongue. August 12th will forever be known as ‘Louie’s Day’ in Branson, MO!