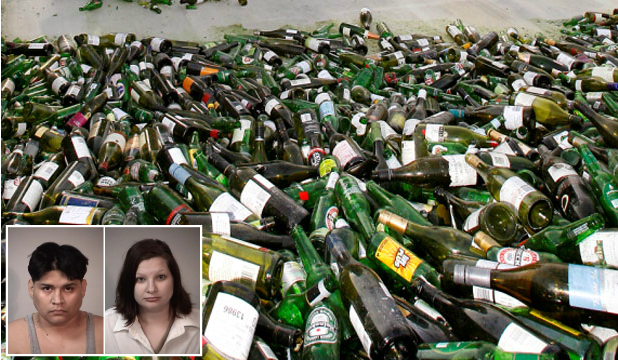 WICHITA, KANSAS — Eric and Sally McLean enjoy the occasional glass of wine from time to time, pretty much drinking a few bottles of wine daily. It wasn’t until the couple returned their bottles to the local redemption center, that they realized they may have a drinking problem.

We touched base with the owner of the Flatlander Redemption Center, Kent Walsh.

I’ve known Eric and Sally for quite some time, they are one of our biggest customers actually. They usually come in monthly to return multiple bags of bottles. Typically they bring in a shitload of wine bottles and a few Mountain Dew bottles. The last time they were in, they brought in 148 fucking wine bottles. It was crazy. This was only three weeks worth of bottles they said. Normally Eric and Sally are talkative, this time the conversation was minimal. It was just a fucking weird situation. • Kent Walsh

Sally refused to give us a statement, however, Eric was more than willing to talk with us.

Yea, Sally and I enjoy a few drinks every now and again. Alright, maybe it’s a little more than ‘now and again’. Sally and I drink a lot actually and it wasn’t until our most recent trip to Flatlander that we realized, we may have a drinking problem. The dude Kent, the guy counting our bottles…he asked us after he was all done if we would like to take a picture of the 148 wine bottles. I’m not sure if he was just being a dick, but he was like, ‘I have never seen so many, this is crazy’. Sally was fucking pissed and embarrassed so now we just throw our bottles in the trash so no one can see them. • Eric McLean

At the time of publication, Sally nor Eric have stopped drinking and they have yet to seek professional help.

We might get help someday…who knows. Right now we are just taking steps to not look like alcoholics.  • Eric McLean