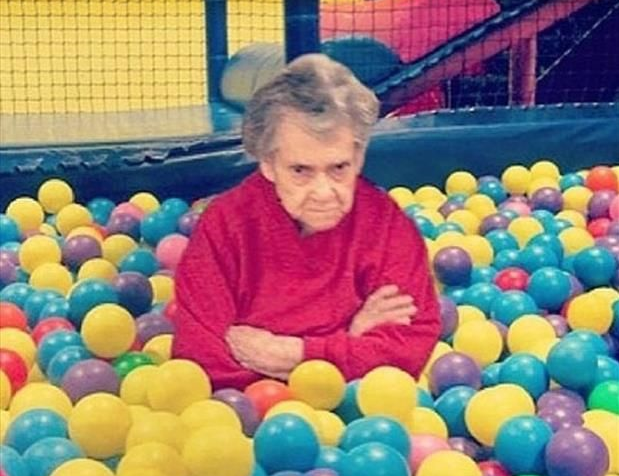 Louisville, Ohio — Last Saturday, Margaret Sawyer attended her grandson’s 4th birthday party at a local McDonald’s and she wasn’t pleased about it.

Forced by her daughter in law, Margaret was dragged down to her local McDonald’s Play Place and forced to watch her grandson and his little asshole friends run around like fucking maniacs.

While there, it is said that Margaret ordered a chocolate milkshake and a small fry. While this tiny meal seemed to put a smile on her face, that smile vanished just as quickly as the meal did. Once her food was gone, her grandson asked her to join him and his friends in the ball pit. Margaret wanted nothing to do with ball pit or her punk ass grandson.

The party ended as McDonald’s employees flipped the fuck out.

We reached out to a few of the McDonald’s workers for comment, in addition to some of the parties attendees — this is what they had to say:

I was ready to pull the damn fire alarm after this old bag shit her pants in the damn ball pit, I mean…I had to fucking clean that shit – literally. I don’t get paid enough to deal with this and that woman should know that. She is a shitty person – literally. – Angela S. (McDonald’s Employee)

I knew we shouldn’t have invited Aunt Margaret, she’s a true nut bag! This isn’t the first time she has shit her pants either. Just about every holiday that our family is together, she shits her pants. If Aunt Margaret doesn’t like something, she just gets quiet, stares into space and then forces out a poopy, right in front of everyone. It’s really odd behavior. – Rachel R. (Margaret’s niece)

This happened nearly a week ago and we are still getting complaints of shit covered balls in the ball pit. – Trevor W. (McDonald’s Employee)